Green Living Around the State

Choosing to Build their first home was a no-brainer for Carl and Julie Christianson. He runs G. Christianson Construction, which was started by his parents in Corvallis in 1986. Less obvious is that the couple would make their home a certified Passive House. Although Carl’s company had never built one, the project suited his natural curiosity. “As someone who’s into gadgets and being innovative, this is an innovative way to build,” Julie Christianson said. “It’s a release for his creativity, trying to figure out how to make it all work.” Buildings, both residential and commercial, account for 39 percent of energy use across the United States, with most of that energy obtained from fossil fuels and nuclear sources. Constructing to the Passive House standard is a tried-and-true method to drastically reduce a home’s energy consumption and thereby the carbon emissions that result from the energy generated for the structure.

The Passive House model attains such energy efficiency through a concert of components, including continuous insulation and elimination of thermal bridges for airtightness, high-performance windows and doors, and controlled ventilation. Gaining experience with Passive House construction, and becoming certified in the approach, was a logical step for Christianson as more customers seek to save energy. “As a builder in town, that’s definitely the direction we wanted to go as a company,” Christianson said. Once the Christiansons found an empty lot in the Brooklane neighborhood, they collaborated with Eugene architect Jan Fillinger, a self-described “passive house geek” and co-author of a book on the subject. Fillinger and a team of consultants delivered the complex modeling needed for Christianson’s crew to achieve such high levels of airtightness, while the couple pored over the home’s details. The Christiansons knew they wanted a Craftsman-style home from the beginning. “I think a lot of people think a Passive House has to look modern,” Julie Christianson said. Now, quality finishes and a thoughtful use of space govern the home, from the gracious front porch to the classic interior trim and generous windows.

The house brims with personal touches, such as the hickory floor inlaid with a compass rose that recalls Julie Christianson’s summers on a tall ship, and the “reading cave,” an alcove under the stairs that reminds Carl Christianson of a childhood spent reading books beside his father’s rocking chair. Then there’s the intangible benefits, like a stable internal air temperature from all the insulation, no pesky drafts, and continuously filtered air free of pollens and pollutants. “I think a lot of people look strictly at the cost of the components,” Christianson said. “But what they’re missing is that by putting all the pieces together, you end up with a house that’s really comfortable.” In 2017, the project became the first certified Passive House in Corvallis, and with solar panels installed on the garage, is nearly Net Zero. Yet as important as such details are, the bigger picture is even more so. “Carl’s house avoids 19 tons of CO2 every year compared to a code house,” Fillinger said. “If all houses throughout the entire United States did that, it is possible to slow down carbon emissions to the point that we can slow down global warming and eventually, hopefully, reverse it.” 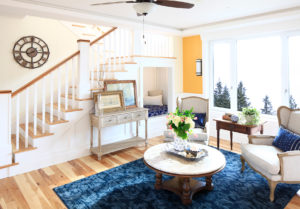 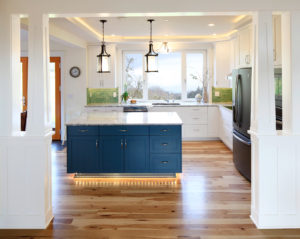 Green Living Around the State

Getting to Net Zero

Carl Christianson and Tanner Wood of G. Christianson Construction were on hand to talk about sustainability in the building trades.

Houzz Tour: Passive Energy and a Reading Nook in Oregon

A builder’s Craftsman-style home features super insulation, a photovoltaic system and a cozy getaway under the stairs